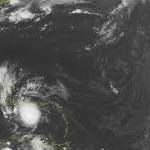 caused a tour boat to overturn near the Samana Peninsula on Sunday. Authorities recovered the bodies of three people and said four others were still missing. Military spokesman Arsenio Maldonado said a small craft advisory was in effect at the time but a cause of the incident has not yet been determined.